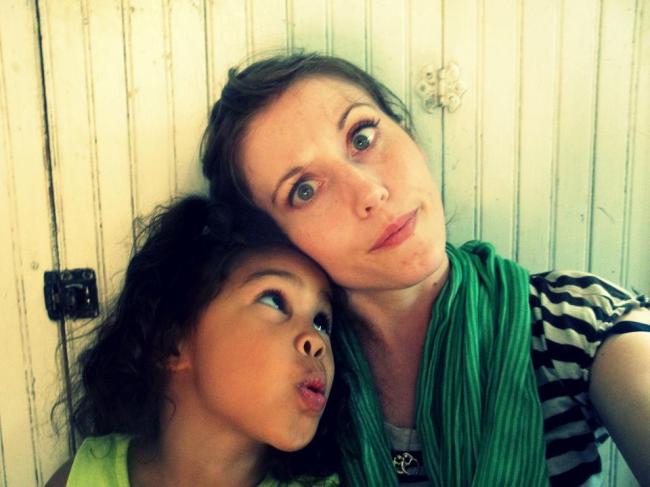 Soooooooo…..this is me. A  little cross-eyed and crazy with Christmas preps. I am a little embarrassed to even be writing this post because my promise of 24 days of Christmas was paved with good intentions! But, simply put, I’m pooped! Christmas is only two weeks away and my list doesn’t seem to be getting any shorter. Though I HAVE been busily preparing and crafting to get things ready for Christmas (making a superman quilt, a queen size quilt, teacher gifts, garland, a bunny and a kitty hat, two princess dolls, two ballerina shirts, a painted plate, two books, two screen printed tees, shrinky dink dog name things {see? this is how tired I am}, a wreath, two VERY ugly Christmas sweaters….you get the idea), I have neglected to take pictures and haven’t had time to blog about them. This is me being incredibly lazy because I am tired! I have also been trying to potty train a puppy at the same time (an early Christmas present for me from my amazingly sweet husband), but it’s honestly like having a toddler in the house. Sooooooo….rather than make any more excuses or promises (though I do hope to be able to post some of my crafts soon as well as yummy recipes) I am offering a peace….um…..offering. Here is a free Christmas printable. Maybe you can use it to make some Christmas crafts of your own! 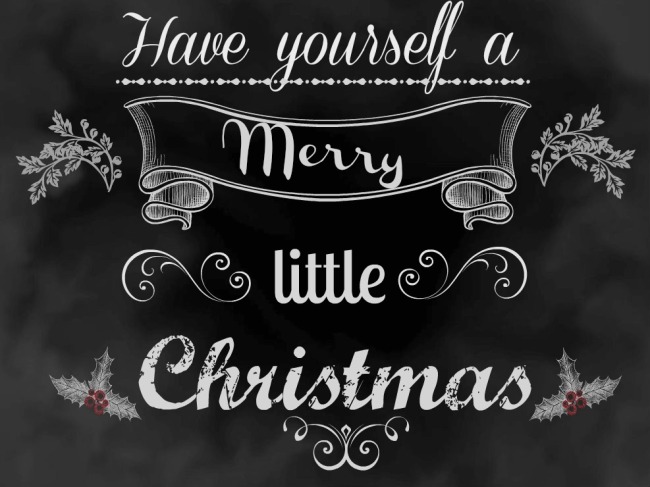 This is one of those posts again that seem a little silly for me to even be giving a tutorial about because these are so ridiculously easy to make, but….well, here we are.

I was shopping for a friend for her wedding shower, and I had this big idea to put together this cute little package of goodies for her to decorate her home with. I started, of course, by stalking her on Pinterest to find out what her style was. Though this might seem a little creepy, it is incredibly effective when trying to pick out the perfect gift for someone.

Anyway, on my quest to finding such aforementioned items, I hunted for cute and affordable picture frames. This friend is super trendy. She always looks like she just stepped out of a magazine, so I wanted to find her something that would fit her style. I did. I found this adorable chevron picture frame that was classy, but still looked a little rough around the edges to give it that shabby chic charm. It was a 4×6 (perfect) and…what?!!! Fifteen dollars!! Have I mentioned before how cheap I am? I could have gotten her the picture frame, but I couldn’t afford to add much else to it. So instead, I grabbed two white frames, $5 each, one a 4×6, the other 8×11. I headed home, got out my Sharpies, only second to Duct Tape in their versatility, and went to work.  My husband so wisely looked at me and said, “You’re doing that freehand?” Yep, was my confident reply.  How hard is it to do a chevron pattern?? Well, apparently for someone like me working at 10 o’clock at night, it’s no small feat.  I hated the way it looked, which was completely uneven and I was sure she wouldn’t like it either. So, my original DIY list looked like this: 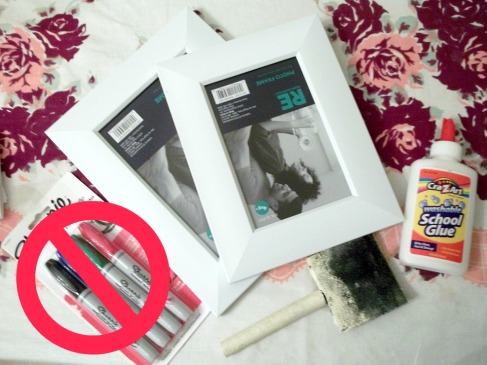 then quickly changed to this: 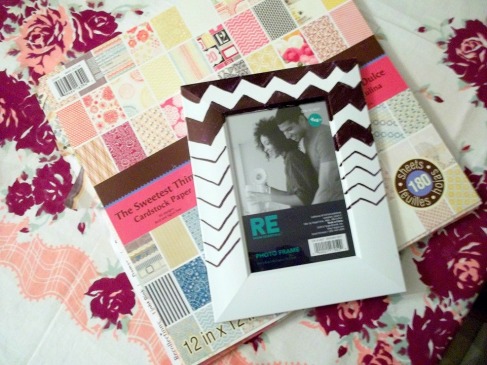 Instead of Sharpie, I decided to go with decoupaging instead. I had this darling paper called, “The Sweetest Thing” that I picked up from Micheal’s to wallpaper my girls’ room and thought it would be perfect for this project. So here’s what I used:

*glue (for decoupage-so much cheaper than Mod Podge!)

Okay, so I know this is probably pretty self explanatory, but this is how it was done: I started by taking the glass and backing off to be able to wrap the paper smoothly around the edges.  Then I cut strips of paper the length of each side and then some so it could wrap around the edges and be tucked around the side and glued to the back.  I cut diagonal slits in inside corners of the paper so they could be fold neatly around the inside edges. I started gluing my paper down, edge by edge, then I covered the whole thing with a layer of glue, then let it dry and did another layer. My first attempted side looked like this: 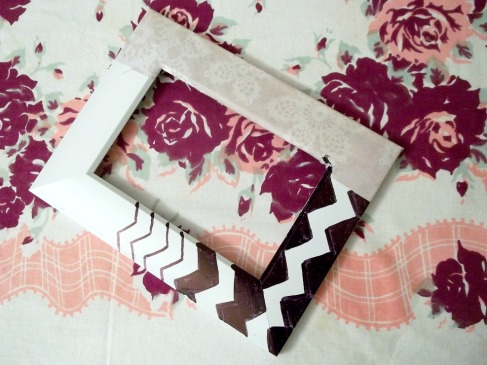 And here are the final products. Pretty easy, right? All in all these took me about a half hour to make both of them. Not too bad! 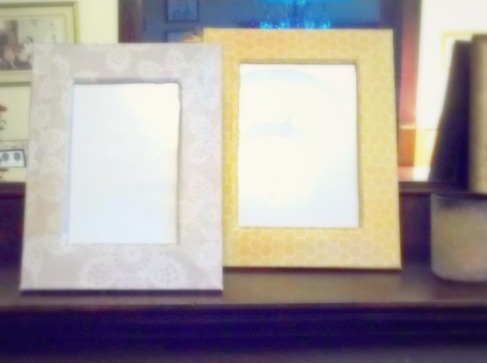 I think she liked ’em. 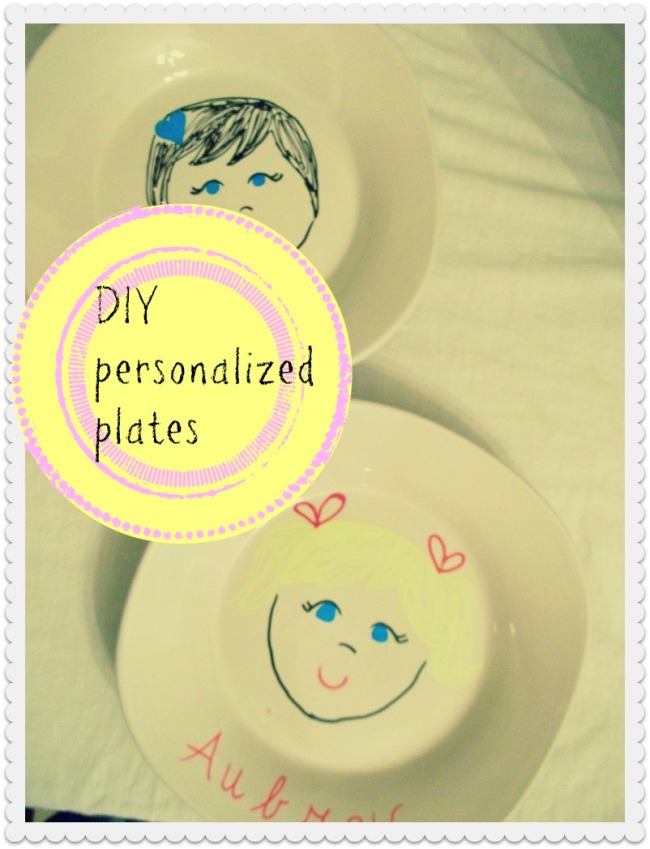 Due to the fact that I already wrote this post and it erased it on me, I will make this brief. I made these for my nieces after these adorable plates I saw on Pinterest, but they are $25 apiece, so I decided to make my own version of them with plates from the Dollar Tree and oil-based Sharpies. 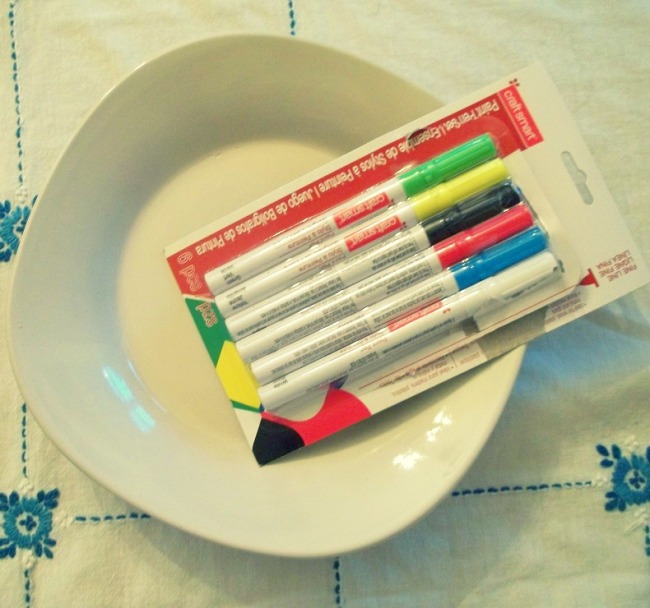 1.Rubbing alcohol (to clean off surface of plate before you begin to ensure the paint bonds thoroughly)

2.Oil based permanent marker(available at any craft store)

As a lot of my tutorials are, this is pretty self-explanatory. I started out by sketching my design onto the plate and then filled it in with marker. It took me all of 20 minutes to do both plates.  I tried to match the hair/eyes to what my nieces’ look like as far as style and color and purposely did not color the hair in thoroughly to give it that “sketchy” look. I popped them in the oven at 350F for 30 minutes (put the plate in while the oven is heating up and remove it after it has cooled off to prevent cracking) and voila! 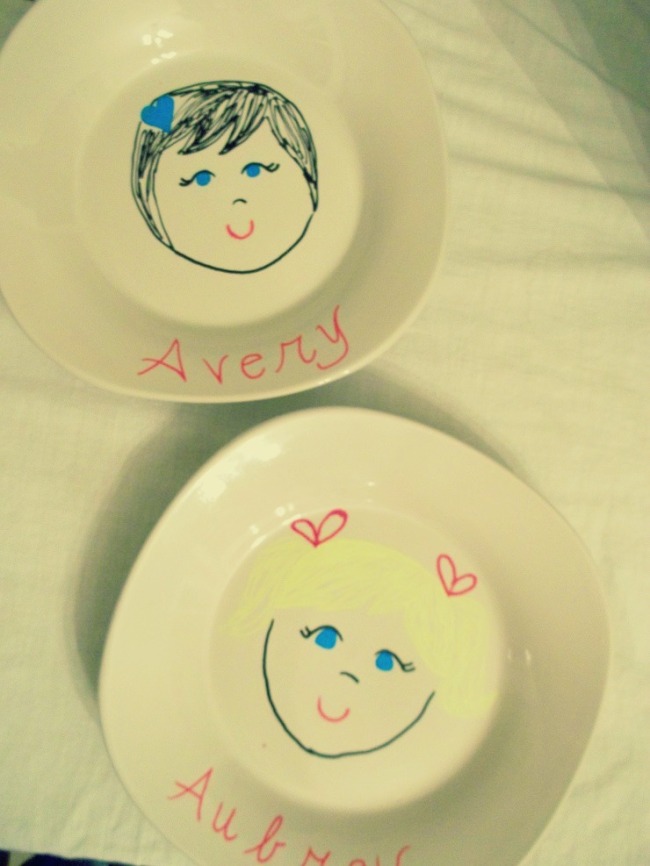 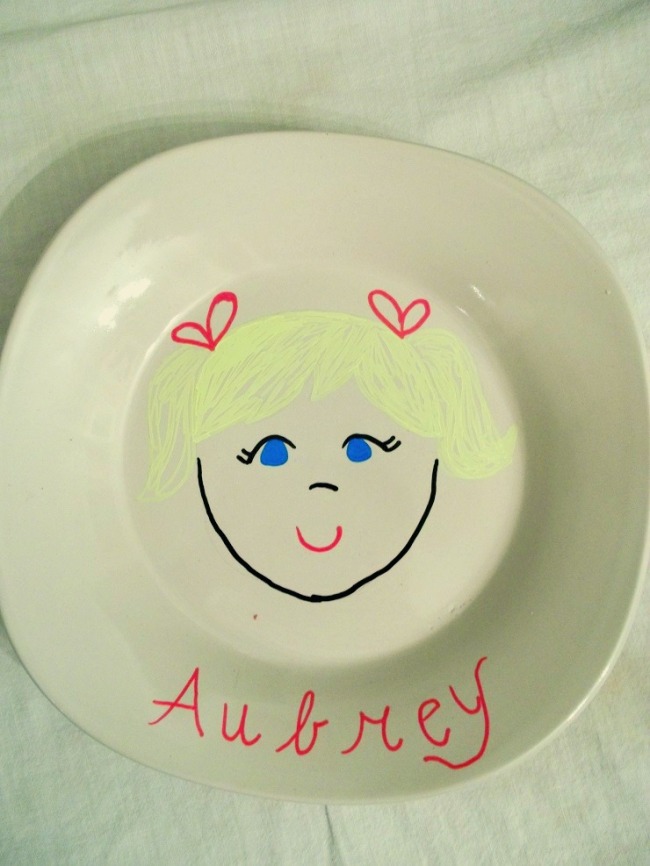 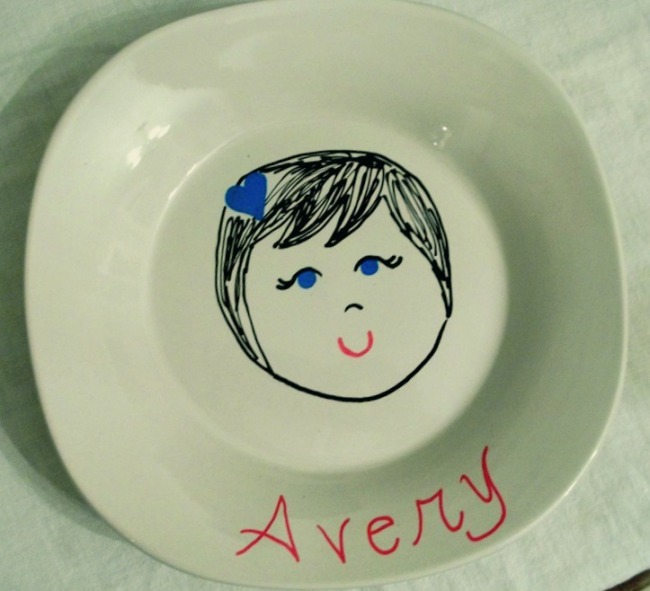 This is Desk. She is from Pennsylvania and she loves sitting in the corner, holding pictures and acting as a drop-off center from time to time of loose change and keys.  In her spare time she acts as a buffet for dinner parties. She is here with us today because she needs a make-over.  She is ready to shed her dull lackluster brown facade and step into something a little more bold and lively. Let’s welcome her, shall we….? 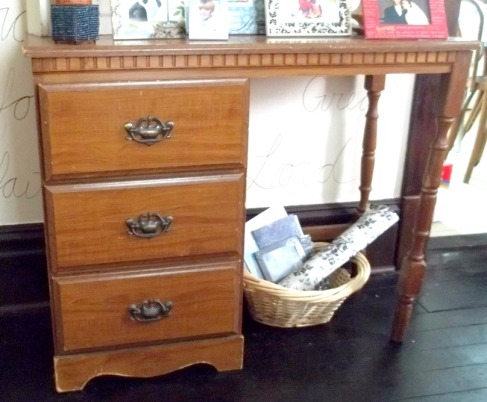 I love nothing more than a good makeover story. When we bought this house two months ago, I fell head-over-heels for the character it oozed from every nook and cranny. It is an old Victorian home, a restoration itself, and the people who set about restoring her to her original glory really kept true to her Victorian roots. All of the dark, mahogany woodwork has been kept untouched and the dark wood floors are spread throughout our main floor. I adore it! The only setback is, with so much dark wood things can look a little drab.  After spending months trying to paint our other home in preparation to sell it, the last thing I wanted to do was to pick up another roller and start on this one, as least not for a few months. In comes this desk. It is old and even missing a support section that connect the two legs, but I have always loved the character of this desk. She has served our family well over the years, but she has not aged well. She needed a face-lift.

Like all of my other tutorials, this is cheap and easy. And, I got what I needed from The Dollar Tree.

1.Pretty contact paper (they always have this pattern at the Dollar Tree, no matter what store I have gone to).

I started off by removing the hardware on the drawers and spraying them with silver metallic spray paint and set them aside to dry.  Then I cut the contact paper to fit the size of the drawer. This only took one roll of the paper to cover them all. A dollar! Score! 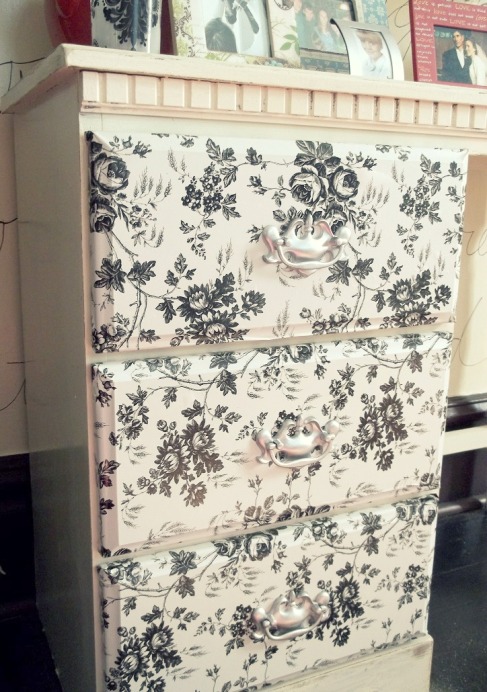 Then I painted it with the latex paint. It only took about two layers of paint. Since I love the “distressed” look, I went through the process of carefully rubbing off some of the paint on the corners and edges to age it a little bit. 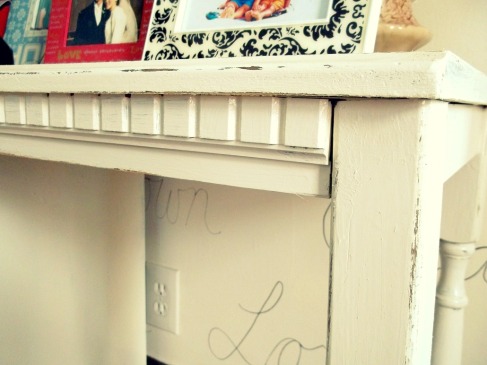 And, there you have it! It took me only about and hour and a half, beginning to end. Not bad. Not bad at all. 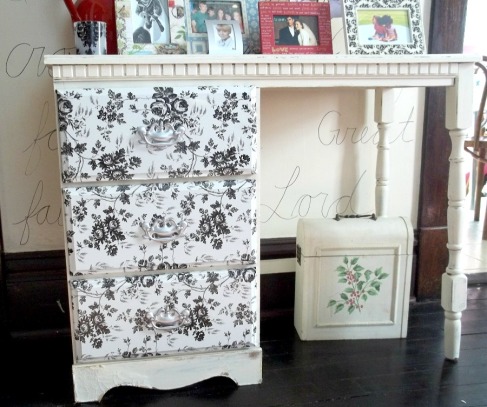 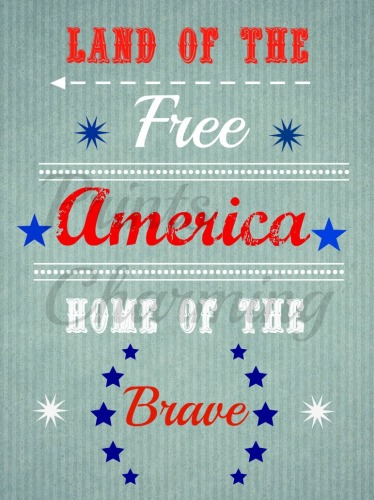 How Dear (my other Etsy shop) 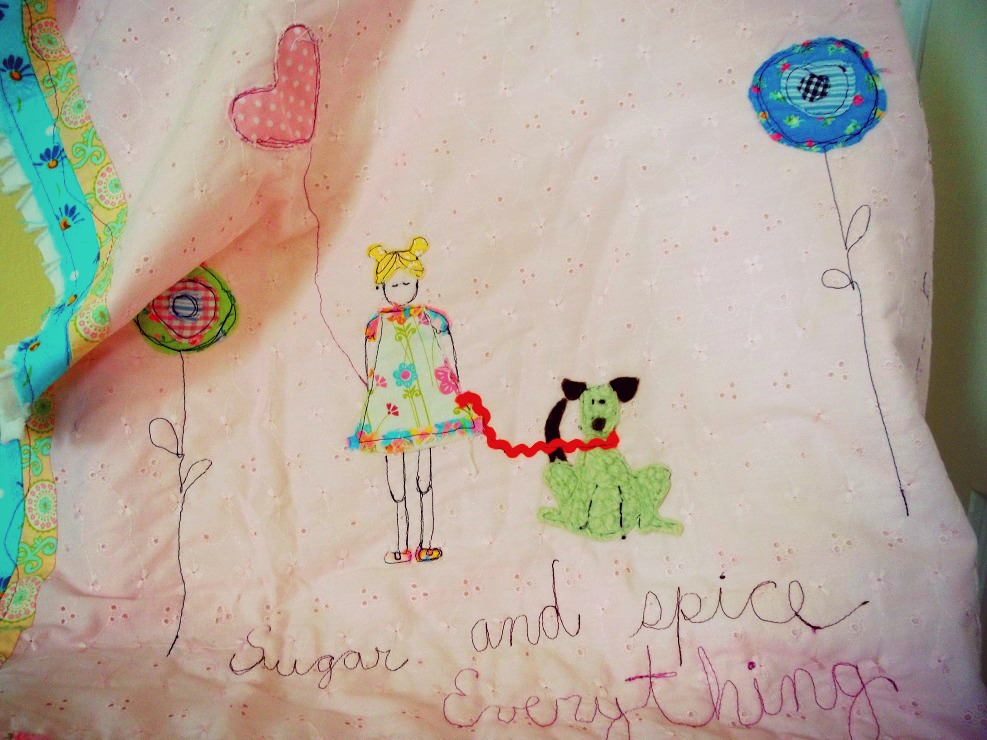